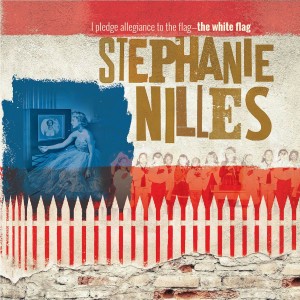 A background in classical piano and a yen to flag the inequities surrounding race and class—Stephanie Nilles comes to the challenge of interpreting Charles Mingus with a handful of tools that should help her animate both the maestro’s deep appreciation for melody and the sizzling wit that drove his indictments.

The singer-songwriter, deemed by some as a purveyor of barrelhouse punk, ain’t a purveyor of deep improv per se, but she does have insight, imagination and a knack for dynamics. I Pledge Allegiance rises and falls as those attributes reveal their strengths and limitations.

An occasional NOLA resident with a love of dive bars and the gritty wisdom that can be garnered within, Nilles laces up Mingus’ boxing gloves to throw a few punches here. A decade ago, on a record entitled Fuck Off, Grizzly Bear, she romped through a duet of “Fables Of Faubus” with a requisite smirk and sneer, tickled to ride its caustic cascade. She kicks off the new disc with the same tune, only this time it’s awash with dramatic exposition that veers toward Rachmaninoff rather than a Bywater barroom.

When she unpacks “Devil Woman” or “Pithecanthropus Erectus,” Mingus’ grit has been usurped by a novice’s sense of grandeur. Her blues moves are a bit too rote to match the material’s depth. Nimble romps through “O.P.” and “Remember Rockefeller At Attica” are filled with pluck, but they’re more charming than chilling. Nilles has done a good job reminding us just how radiant the composer’s themes remain, but in the large, I Pledge Allegiance feels like she’s bitten off more than she can chew.