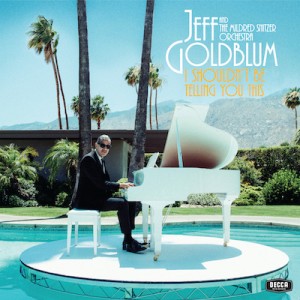 Some celebrity music-making is more about the celebrity than it is about the music. And then there’s the cliché about actors returning to their first love. But neither of these apply to Jeff Goldblum. He plays with a natural swing and a deft, uncomplicated touch. If you asked him about influences, he might mention Teddy Wilson. There’s the same grace and instinctive melodicism, though Lee Morgan’s “The Sidewinder” and some other bold choices included on his latest recording suggest the pianist is hip to the hard-bop generation as well.

Goldblum does Herbie Hancock’s “Driftin’” and Lalo Schifrin’s “The Cat,” and it’s here that his pianism comes across most clearly, flattered by light, spacious arrangements and cracking production values. He has a big reach and he’s not averse to throwing in the odd unusual voicing. It’ll surprise newcomers that Goldblum’s not the main singer, though; guests include Sharon Van Etten, Fiona Apple, Miley Cyrus and Gregory Porter. But Goldblum does a lovely, tired “Little Man You’ve Had A Busy Day” right at the end, with that little hitch in his voice.

A more coherent album than Capitol Studios Sessions, as the title maybe implies, but a year on, and five years into his Carlyle Hotel residency in New York, Goldblum’s new career seems to be right on track.