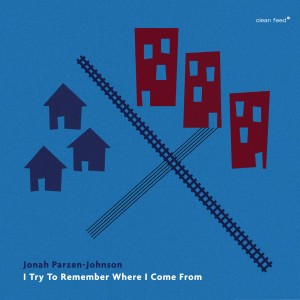 There are only two instruments on Jonah Parzen-Jonson’s new album—baritone saxophone and analog synthesizer—and he plays both of them. Despite the unlikely instrumentation, this seven-song, 35-minute program is so successful that it actually feels a bit too short. On I Try To Remember Where I Come From, he finds the common ground between two of his musical voices. On the opening track, “Cabin Pressure,” Parzen-Jonson’s assertive bari calls precede a series of long tones that a filtered synth line dances on top of, creating a contrast between a drone-type element and a more kinetic one. He doesn’t stick to just a few tones for the album—he dives headfirst into the pool of possibilities, exploring the range of each instrument, sculpting sounds that are akin to peanut butter on a cheeseburger. It doesn’t make sense in theory, but give it a try and you’ll be glad you did. Despite being made by recording sax solos and then assembling the synth parts around them, each track has a unified feeling that contributes to an overall sense of cohesiveness. This album vividly channels free-jazz with elements of improvisation and composition, combining to create a sustained, meditative mood, transporting listeners to another world.