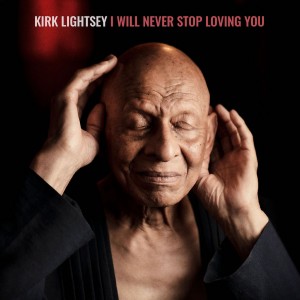 Pianist Kirk Lightsey, who has been based in Paris since 2000, first recorded in 1962 with George Bohanon, played with Chet Baker in 1965, and toured with Dexter Gordon during 1979–’83. He really came into his own in 1982–’83 with a pair of solo records for Sunnyside: Lightsey 1 and Lightsey 2. Four of the seven songs from those dates are revisited on his recent I Will Never Stop Loving You.

In fact, all seven selections on this set had been recorded by the pianist by 1991, so it is fair to say that he was quite familiar with the material. He begins with a thoughtful and mostly out-of-tempo treatment of the title cut, one of his most memorable originals. Lightsey has always had an affinity for Wayne Shorter songs and he includes three of them on this set, including a playful version of “Fee-Fi-Fo-Fum” that has him work in some light stride piano.

Tony Williams’ “Pee Wee,” Shorter’s “Infant Eyes” and Phil Woods’ “Goodbye Mr. Evans” are given similar treatment. Even “Giant Steps” is taken at a fairly relaxed tempo before the all-too-brief recital concludes with Shorter’s jazz waltz “Wild Flower.” Lightsey is quietly creative throughout these friendly explorations, which often sound as if the pianist was having warm conversations with old friends.