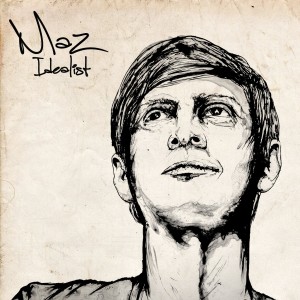 Mike “Maz” Maher has played a prominent role in Snarky Puppy’s rise, blowing the trumpet in concerts around the globe as the group became darlings of the festival circuit. With Idealist, Maz is putting the trumpet down and grabbing a vocal microphone for songs that bounce between ethereal pop and psychedelic soft rock.

Lyrically driven, the subject matter is political by nature, but without crossing the line into preachy territory. The opening track, “Dream Away,” touches on the worlds inside of your head and how they have the power to transcend into reality. “When you assemble publicly you better learn some self-defense,” he croons on “These Words,” clearly bothered by police responses to Black Lives Matter protests, and more recently the pipeline standoff. “Oh Jesus, please turn these bombs into wine,” he pleas on “Bombs Into Wine.”

In the liners, Maz claims to have been highly in uenced by Pink Floyd, which is visible in certain elements of the record. On “Picture,” a spirited vocalist sings in the background during the song’s most dramatic parts. “Dying Star” is slow, with squealing guitars and a cinematic touch. He writes, “I didn’t model this album on any one band, but I’d say it shares that idea of ‘musical space’ that Floyd had.” By ditching the sound that brought him to prominence, Maz has explored a new path that works surprisingly well. Equal parts psychedelic jazz-rock and soulful r&b, Idealist is a worthy addition to the releases that the Snarky Puppy/GroundUP Music umbrella has produced.