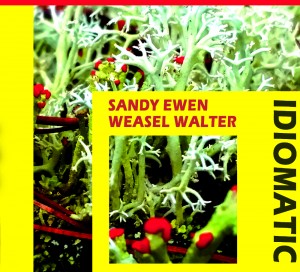 When free improvisation first flowered in the latter half of the 20th century, it was often characterized as non-idiomatic. This description distinguished the music from the omnipresent practice of improvising within the context of an idiom. But it quickly became problematic, as it became clear that a community of players improvising outside the mandates of genre had created another one with its own proscriptions and practices. Guitarist Sandy Ewen and drummer Weasel Walter know that history, and plenty of others besides.

In addition to improvising in her old hometown of Houston, as well as her current base in New York, Ewen has played rock music with Weird Weeds; Walter’s been playing rock, metal, punk, no wave and various free musics for decades. And the two have a shared history of their own, having recorded twice before with bassist Damon Smith. Combine those collective pasts with nonpareil approaches to their instruments and you’ve got an idiom unto itself.

Ewen sets her electric guitar in her lap and manipulates its strings and its body with bolts, rods, steel wool and lengths of chalk. Walter summons myriad timbres from a conventional drum kit, which he navigates with speed and precision, and muddies his clean attack with cheap microphones, digital delays and a synthesizer. They don’t relate in terms of notes, chords and measurable meters, instead focusing on contrasting textures and densities of attack. Their collaboration yields plenty of visceral thrills, but becomes even more rewarding when they throttle back to devise exchanges of alien information in a language that is purely their own. It still makes perfect sense.