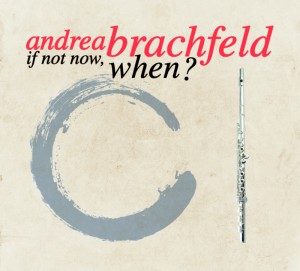 Andrea Brachfeld, a veteran jazz flutist with impeccable technique, chooses a more fulfilling path than mere virtuosity on her new disc. If Not Now, When? focuses just as much on her generosity as a bandleader and compositional skills.

As Brachfeld mentions in the liner notes, she’s known pianist Bill O’Connell since they began playing in New York during the 1970s. She’s known the other musicians in this quartet for almost as long. That familial cohesion comes through in the aptly titled “Creating Space”: Bassist Harvie S sets an ominously inviting tone, which drummer Jason Tiemann answers through light cymbal hits. But the composition that yields the most surprising turns is the 10-minute “Deeply I Live.” This ballad is formed of different interwoven parts with Harvie S and Tiemann’s solos building things up and then dramatically turning everything around midway. Brachfeld dexterously weaves through all of these changes while also tying the initially contrasting passages together. The group itself also foregrounds plenty of the bandleader’s other strengths, like when everyone pushes her into different intervals on the brisk “The Listening Song.” And since Brachfeld knows when to let a fine groove play itself out, she adds the right kind of bluesy vibe to “Amazing Grace.”