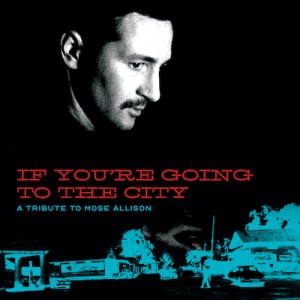 Back in the day, some of the best playlists were curated by record store clerks who made their own cassettes. Nowadays, some of the best playlists are generated using artificial intelligence and data analytics. One thing that was true decades ago and remains so today is that the various-artists tribute album can be a wondrous source of musical variety. Any playlist that has artists like Iggy Pop, Chrissie Hynde, Richard Thompson, Loudon Wainwright III, Frank Black and Ben Harper with Charlie Musselwhite on it is sure to generate attention. But when you take that talented lineup and ask them all to sing compositions by eccentric jazz and blues singer/pianist Mose Allison (1927–2016), the result is an intoxicating treat.

On If You’re Going To The City: A Tribute To Mose Allison, the lyrics alone are worth the price of admission. Taj Mahal gently growls, “If silence was golden, you couldn’t raise a dime/ Because your mind is on vacation and your mouth is working overtime” (“Your Mind Is On Vacation”). And Fiona Apple croons, “Your cellular organization is really something choice/ Electromagnetism ’bout to make me lose my voice/ Got all my circuits open” (“Your Molecular Structure”).

Produced by Sheldon Gomberg and Don Heffington, the album concludes with “Monsters Of The Id,” a duet featuring Elvis Costello and the honoree’s daughter, Amy Allison. Piano work on that track was provided by Mose himself.

The Fat Possum label has packaged this CD in a two-disc set that includes a DVD of Paul Bernays’ 2005 documentary Mose Allison: Ever Since I Stole The Blues. The film includes some admirers who don’t appear on the album, including Pete Townsend, Van Morrison, Keb’ Mo’ and Ben Sidran.