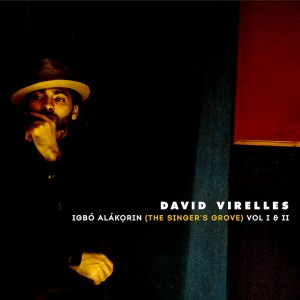 For the past few years, pianist and composer David Virelles has mapped out an intriguing artistic path by delivering modern jazz abstractions that deftly imply ritualistic rhythms associated with folkloric Afro-Cuban music—without the results sounding like conventional Latin jazz. After three ECM releases, he returns to Pi Recordings with another folkloric-centric outing that finds him far from the outer reaches and more earthbound.

The title of Igbó Alákorin (The Singer’s Grove) Vol. I & II makes use of an apt Yoruba phrase. And for sure, singers play a vital role on much of the disc’s first half­—“Volume I, David Virelles Introduces Orquesta Luz De Oriente”—as it focuses on pieces composed by legendary 1930s big-band figures like Electo Rosell, Bernardo Chauvin Villalón and Mariano Mercerón, all of whom hail from Virelles’ hometown of Santiago de Cuba. Upping the ante was Virelles deciding to record Igbó Alákọrin in Santiago de Cuba and reconnecting with many of the city’s contemporary music heroes, including singers Emilio Despaigne Robert, Alejandro Almenares and José Aquiles Virelles (his father), and trumpet-playing brother Abel Virelles. Virelles and company articulate that homecoming joy best on the driving “Echa Pa’ Allá,” the punchy “El Rayaero” and the sensual “Bodas De Oro.”

As the vintage orchestral jazz compositions bounce to such indigenous Afro-Cuban idioms as danzón oriental, chepinsón and bolero, Igbó Alákọrin seduces with a transportive Buena Vista Social Club allure. Throughout the first half, Virelles tucks in his expansive piano virtuosity in service of the material, revealing not a hint of the avant-garde abstractions that distinguish his earlier ECM discs.

Virelles’ piano playing is more prominently featured on the disc’s second half—“Vol. II, Danzones De Romeu At Café La Diana”—which celebrates the music of early 20th-century Cuban composer and pianist Antonio María Romeu. Here, Virelles pairs with veteran güirero Rafael Ábalos. And even on such ebullient tunes as “Tres Lindas Cubanas” and “Mojito Criollo,” the pianist closely adheres to the original melodies, which to some will provide new revelations of his sinewy touch and graceful athleticism when it comes to unraveling succinct flourishes.

Cynics might scoff at Igbó Alákọrin, arguing that it’s one of those obligatory “deep in the tradition” standards albums that avant-garde-leaning musicians must release to prove their jazz bona fides. A closer examination of the love and vigorous research that Virelles put into the project reveals that the album is anything but a compulsory strategic move.