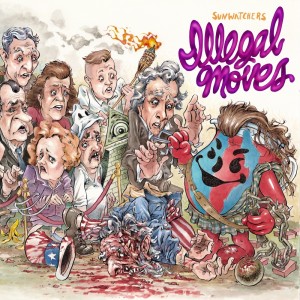 The cover of Sunwatchers’ Illegal Moves depicts a radicalized Kool-Aid Man pushing back against a murderers’ row of iconic conservative bogeymen, from Nixon to Thatcher to Ted Nugent. And its musical content mirrors the entertainment value of the image: utterly enjoyable, crowd-pleasingly right on and comfortably familiar.

The New York-based quartet unveiled its noisy, psychedelic jazz-rock on a self-titled 2016 album, and for its third recording, the ensemble keeps intact the formula that made its first two releases so compelling. Bassist Peter Kerlin and drummer Jason Robira underpin most songs with tight, repetitive rhythmic figures. Reedist Jeff Tobias’ adenoidal squawking ratchets up the tension in some places, and in others develops any number of the album’s memorable tunes.

Despite the album cover’s implied promise, though, nothing revolutionary takes place. Instead, Illegal Moves offers a highly literate, technically proficient blend of familiar sounds from templates frequently associated with insurgent potential. The album succeeds when its compositions outgrow their influences, or when moments of sincerity peep through.