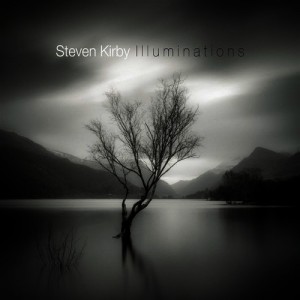 Steven Kirby, a guitarist of rippling technique and a poetic mind, has developed a modern jazz guitar style that bridges the angular lyricism of Pat Metheny and the painterly asceticism of Jim Hall. Illuminations, his third album as a leader, finds him in clear command of those two poles—at times oscillating between them, at others merging them—while also nodding to the idioms of classical and folk music. The resulting sound is dark-hued but also invigorating. That’s due in part to the natural momentum of Kirby’s flight-prone single-note lines, a specialty that he accentuates nicely via the accompaniment of pianist John Funkauser, bassist Greg Loughman, drummer Mike Connor and especially vocalist Aubrey Johnson. The singer (who, like Kirby, keeps a foot in both the Boston and New York jazz scenes) adds wordless vocals to a handful of deeply felt songs on this album, beginning with the opener, “Parabola,” which rings with sky-blue loveliness. Kirby’s tone here is round yet organic, a perfect match for Johnson’s silky pronouncements. (She retains gentle composure even on the title track, which finds her climbing to the limit of her range and navigating over hilly melodious terrain.) Playing acoustic, as on the ballads “Beautiful Rain” and “A Luz Das Estrelas,” Kirby crafts a careful equilibrium, imbuing each note with both the levity of feeling and the weight of purpose. But there’s also plenty of musical fun to be had. The guitarist’s cheekily titled “May The 4ths Be With You” makes a game of the titular harmonic interval, with a proggy melody that Kirby and saxophonist Bill Vint unspool with ease. But the most awe-inspiring arrangement on the album is Kirby’s version of “Over The Rainbow,” which revolves around churning pools of sound, its sense of time suspended, its energy unbound.