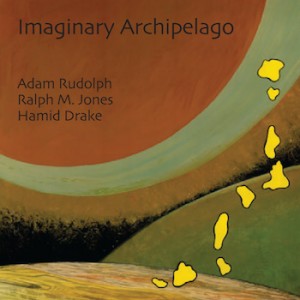 It’s easy to get lost in Imaginary Archipelago, a cooperative effort by drummer/percussionists Adam Rudolph and Hamid Drake, and saxophonist/flutist Ralph M. Jones—three commanding improvisers with decades of work behind them to prove their mettle.

There’s the thrill of hearing the two veteran percussionists—who as teenagers met in a Chicago drum shop—explore imagined worlds of sound where rhythms jut out of soundscapes as quickly as they’re again submerged in Rudolph’s whirring electronic experiments. Jones serves to sketch out melodies and patterns, as on “Apekweh,” while his bandmates decide to explore a calmer segment of their improvisational skill set. Sure, some of this might come off as new agey—perhaps more so than the trio’s Karuna recording from 2018. But as soon as that perception might crop up, a track like “Suwakaba” seems to recast the sounds of the Gary Bartz NTU Troop for the 21st century. Jones, who’s worked with both percussionists in Rudolph’s Moving Pictures ensemble, gets one of his most prominent features here, his horn echoey, punchy and electronically affected, but intriguingly so.

Despite these performers having a history together that stretches back decades, their collective creative engagement hasn’t waned. And Imaginary Archipelago is yet another indication that Drake somehow remains one of most varied percussionists of his—or any—generation who just isn’t necessarily a familiar name to most jazzers.