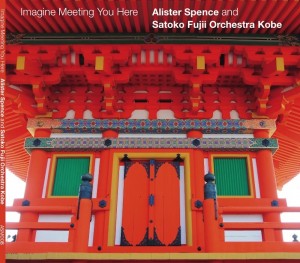 On Imagine Meeting You Here, Australian composer Alister Spence takes full advantage of the possibilities afforded by pianist Satoko Fujii’s improvising big band, Orchestra Kobe, and the results are pretty exhilarating. Throughout the album-length composition’s five sections, the band turns on a dime, moving from noirish high drama- to playful, Arkestra-inflected group improv. Spence designed the album giving equal weight to the compositions and improv, sometimes resulting in the pushing of “serious” musical boundaries: Out of context, portions of Imagine easily could be mistaken for the homemade vernacular improv championed by the likes of the Nihilist Spasm Band. But hearing those sections bump up against the piece’s more controlled sections reveals a discipline in Orchestra Kobe’s playfulness. It’s no small challenge to corral any big band, and that goes double when they’re performing a composition that leaves so much room for play. But Spence has the chops to make it happen.