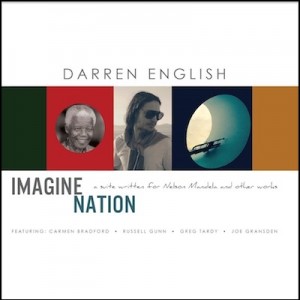 In his liner notes to Darren English’s debut album, fellow trumpeter Russell Gunn notes, “Darren English is an adventurous, resolute new voice on the scene and will unquestionably leave his imprint on the world of ‘jazz’ in years to come.” When Gunn makes such a bold claim, it’s our duty to listen.

The Cape Town-born, Atlanta-based English certainly plays with a mature tone, and he’s planned an ambitious menu for his debut recording. English scalds the senses in tandem with Gunn and trumpeter Joe Gransden on “Cherokee”; partners with vocalist Carmen Bradford on a pair of standards; and introduces the album with a seven-minute tribute to Nelson Mandela.

That tribute—the album’s title track—is impressive. It’s also a bit of a snooze, with its overly lush background accompaniment. “Body And Soul” follows—both in sequence and in style—its lethargic groove doing little to maintain interest after the lengthy opener, though it does show off English’s gorgeous tone and sparkling solo technique. Dizzy Gillespie’s “Bebop” thankfully raises the temperature, a bristling Afro-Cuban rhythm driving English to a superb, elegantly stated solo. Bassist Billy Thornton and drummer Chris Burroughs are particularly spirited and inventive as well.

English dons the trumpet mute for an uptempo “What A Little Moonlight Can Do” with Bradford; he and the vocalist are equally splendid and evocative. Part two of English’s tribute to Mandela continues with “Pledge For Peace,” a thoughtful composition that includes recordings of Mandela reflecting on his struggle. It’s followed by the closing Mandela tribute, “The Birth,” a dexterous track which recalls the work of trumpeter Terence Blanchard.

English’s playing is grand, his vision impressive, his range limitless. But in biting off too much for his debut he reveals too much, too soon. Take it easy. Show just a little skin on first blush, kid. The world will wait. And return.