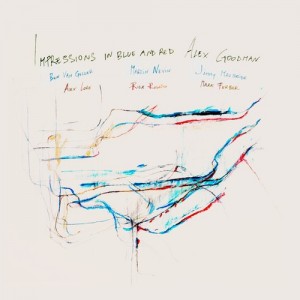 Alex Goodman hears red, and hears blue. Other colors, too.

The New York-based guitarist’s innate sensitivity to the associative power of colors and their various shades served as the inspiration behind this well-planned and superbly executed double album. On Impressions In Blue And Red, Goodman leads two distinct quartets—one for each color—on adventures in synesthesia that paint vivid musical “pictures” and conjure a full spectrum of moods and meanings. For the “blue” portion of the program (disc 1), Goodman is joined by alto saxophonist Ben Van Gelder, bassist Martin Nevin and drummer Jimmy Macbride. Goodman’s “red” ensemble (disc 2) includes altoist Alex LoRe, bassist Rick Rosato and drummer Mark Ferber. It’s impossible to explain what makes any particular sounds “blue” or “red” to Goodman’s ear, but suffice it to say that the two-pronged music-by-colors approach that he and his bandmates follow on Impressions In Blue And Red succeeds in eliciting a wide range of intuitive feels that transcend verbal description.

“No Man’s Land,” the opening track of disc 1, takes the listener into a world that’s so obviously blue, one need not ponder how or why. Meanwhile, “Choose,” the opening track of disc 2, comes across as something drawn from the same source material as King Crimson’s 1974 prog-rock album Red, with its insistent guitar patterns played over an ever-shifting, odd-meter groove. Impressions In Blue And Red benefits from a symmetry and flow imposed upon it by the leader, with each color theme complementing—rather than clashing with—the other.

Eight tracks serve as improvised solo intros that spotlight Goodman and each of his bandmates in turn. The album also includes a total of 15 originals by Goodman, plus interpretations of Herbie Hancock’s “Toys” and a movement from a baroque sonata by Johann Rosenmüller. Each disc closes with Goodman playing an impromptu solo version of a standard: “I’ll Never Be the Same” (Malneck & Signorelli) on the “blue” disc and “If I Loved You” (Rodgers & Hammerstein) on the “red.” A regular on the New York club scene and the international festival circuit, the Toronto-born Goodman makes his strongest statement to date with this bold, ambitious album.