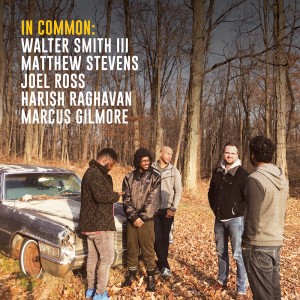 As a title, In Common perfectly captures the shared sensibility that goes into the music here. Assembled by guitarist Matthew Stevens and tenor saxophonist Walter Smith III, this quintet—which also includes vibraphonist Joel Ross, bassist Harish Raghavan and drummer Marcus Gilmore—doesn’t represent a specific style so much as general modernity, one that acknowledges the traditions of jazz, but is happy to move beyond them.

An improvised duet between Stevens and Smith titled “freefive” introduces the album with the guitarist playing chords under a slow, symmetrical statement from Smith and followed by a flurry of saxophone 16ths that come to a halt when the guitar resolves a suspended chord. In other words, it conveys the shape and feel of traditional jazz while remaining harmonically untethered and melodically free—the best of both worlds, if you will.

A similar eclecticism animates the rest of the album. “ACE,” for example, rolls along over a loop that sounds like a cross between wind chimes and toy piano; augmented by Raghavan and Gilmore’s deep funk, it seems to lean pop, until Smith and Ross enter with alternating, elegiac phrases that keep the tune firmly in the jazz camp. The pulse on “YINZ,” by contrast, is loose enough to pass for free time. But the interplay among the five players is so conversational that it feels like a groove anyway. “Baron” boasts a similar level of collectivity, but at a brisker tempo and working off a rhythmically gnarled head.

In Common manages the great trick of being utterly singular, yet somehow hauntingly familiar. If only there were more of the album to fall into.