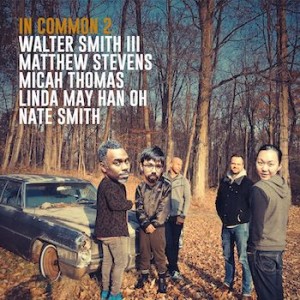 The cover for In Common 2 is identical to its predecessor, except the outsized heads of pianist Micah Thomas, bassist Linda May Han Oh and drummer Nate Smith are photoshopped onto the bodies of the first album’s rhythm section. In other words: same concept, slightly different players.

Like its predecessor, 2 starts with a duet between the principal members, guitarist Matthew Stevens and tenor saxophonist Walter Smith III. But instead of a collective improvisation, this time they deliver a sweetly elegiac rendition of the late Roy Hargrove’s “Roy Allan,” an intro that underscores how 2 emphasizes writing. But a more structured approach to rhythm is what distinguishes the two recordings: “Cowboy” rides in on a groove built on a bass ostinato, which Oh continues to allude to even as the playing gets freer. “Type Rider” is similarly ostinato-oriented, although this time it holds even as Smith solos against the band. All that structure doesn’t box the music in, though. If anything, it seems to energize the rhythm section, which in turn brings out the best of Stevens and Smith. Listen to how the itchy pulse beneath “General George Washington” sparks a taut solo from Smith and churning lines from Stevens’ acoustic.