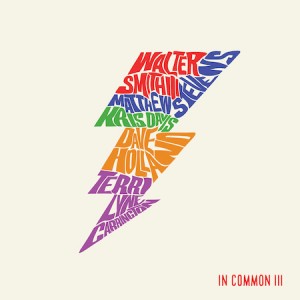 With In Common III, tenor saxophonist Walter Smith III and guitarist Matthew Stevens, two artists who have made careers out of making others sound good, come together for their third installment of being the stars of their own simpatico show. Outside of his work as a leader, Smith III is best known for his searching performances with trumpeters Terence Blanchard and Ambrose Akinmusire, and pianists Jason Moran and Gerald Clayton. Stevens has been stepping out as a leader lately, but has been a glue member of groups led by Esperanza Spalding and Terri Lyne Carrington, to name-check just two. But here we have the Smith III and Stevens sharing leadership duties on of the coolest projects you’ll hear this year. In Common III shares beauty, angst, joy and friendships new and old. The friendships come in the form of guests appearing on the recording. Just as on the previous editions of In Common, this third volume delivers an all-star cast with pianist Kris Davis, drummer Carrington and bassist Dave Holland joining Smith and Stevens. They prove perfect for the set, as demonstrated on Stevens’ tasteful tune “After.” It begins with the shimmer of Davis on the piano, almost calling the band to join her on the melody. Smith III does exactly that, with a touch of blues and grace. Carrington kicks in with an intriguing, lovely beat and Holland perfectly locks in as only he can. Stevens, for his part, seems to enjoy what this group is doing with his music, tastefully playing in call and response. It’s clearly an ensemble feel, with everyone there to support and lift each other, and make really lovely music in the end. The album also features four spontaneously composed pieces for Davis, Smith III and Stevens to bend, bop and kick around in the sandbox. My favorite is “Oliver,” a quirky bit of aural fun. The three take the piece further and further out, Stevens seeming to fiddle with as many atmospherics as he possibly can find on his pedalboard. This recording is a wondrous listen from start to finish. Stevens and Smith III drew this listener in from the beginning with “Shine,” a duet of just under two minutes duration that you wish would go on much longer. And talk about finishing numbers: Stevens’ “Miserere” is one of the most lovely ballads these ears have heard in a very, very long time. To find out more about Stevens, Smith III and In Common III, check out the feature article we’re preparing to run in DownBeat’s May 2022 issue.