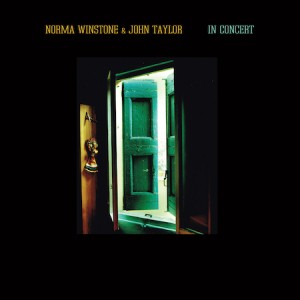 Assessments of British singer Norma Winstone tend to center on her early avant-garde and mostly wordless vocal work. Assessments of her former husband John Taylor, who died in 2015 after the couple had split, usually emphasize the quiet, pastoral side of his work. Winstone, though, always has been a brilliant interpreter of song, both Broadway tunes and more recondite fare, including Provençal trouvères material. And while some might think of Taylor solely in terms of limpidity, skip directly to “Coffee Time” here, a bouncing samba that has him playing with weight and energy, and using the body of the piano and damped strings to build up a rhythm behind Winstone’s witty scat.

The couple’s quieter, perhaps more familiar side is evident on “Celeste,” a gorgeous, almost evanescent Ralph Towner ballad, with lyrics by Winstone. It brings to an end a 1988 concert all the more remarkable for having been completely impromptu, set up without notice at the end of Winstone and Taylor’s teaching residency at London’s Guildhall School of Music and Drama. And until now, the music only had been available via an obscure 1999 cassette release.

What might seem like a chance recovery and a nostalgic souvenir actually prompts some overdue reappraisal of the duo. The ability to program compositions at the drop of a hat by Towner, Steve Swallow, Egberto Gismonti and bright originals suggests the range and depth this partnership represented. Taylor sadly is no more, but Winstone continues to be one of Europe’s most important voices.

In Concert: Lucky To Be Me; Ladies In Mercedes; Cafe; The Glide; In Your Own Sweet Way; Round Midnight/Midnight Sun; Coffee Time; Celeste. (58:40)
Personnel: Norma Winstone, vocals; John Taylor, piano.