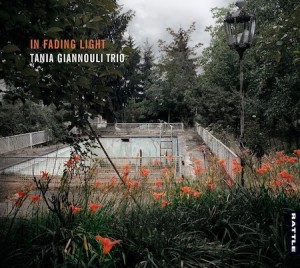 During the past decade, introspective Greek pianist Tania Giannouli regularly has experimented with different instrumental settings, radically changing the timbre and tone of her music without altering its charged air of mystery. On one recording, she played intimate duos with Portuguese reedist Paulo Chagas, while another was a trio with New Zealand taonga pūoro—a traditional Maori wind instrument—player Rob Thorne. She continues the practice on In Fading Light with a trio formed to play at Jazzfest Berlin in 2018. On most of the 12 pieces, Giannouli and oudist Kyriakos Tapakis carve out moody ostinato patterns—delicately embroidered with pretty melodies—that clear space for the drifty explorations of trumpeter Andreas Polyzogopoulos.

On “Labyrinth,” a measured piano line cycles meditatively as the oud freely casts about before falling into shadowing accents, giving a wide berth to the trumpeter’s smears, unpitched breaths and floating phrases. “When Then” reframes the plot with an aggressive, driving attack, as a hammering left-handed piano line intertwines with a twangy oud lick, propelling Polyzogopoulos toward a sharper tone and phrases that slash, rather than glide. The folkish “Hinemoa’s Lament” lies somewhere in between. But there are pieces that depart from that form: the elliptical “Fallen,” when all of the musicians impart silence magnificently; the more abstract improvisational gambits of “Disquiet”; or the high-speed, Hungarian-flavored “Bela’s Dance.”

The players reveal a strong collective rapport across the album, and every gesture and phrase seems generous and empathic. But the pervasive moodiness can feel like a damper on what might have been accomplished with a more varied emotional palette.