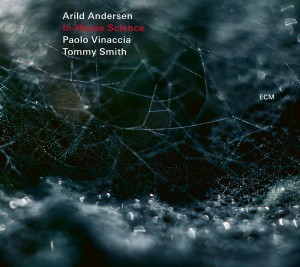 When celebrated Norwegian bassist Arild Andersen recorded Live At Belleville with Scottish saxophonist Tommy Smith and Italian drummer Paolo Vinaccia in late 2007, the powerhouse trio only had been playing together for about two years. Still, it was a watershed moment in an already storied career, helping Andersen to earn the Prix du Musicien Européen award from France’s Academie du Jazz in 2008.

A decade later, Andersen, Smith and Vinaccia have honed their chemistry to an almost telepathic degree. Their second live album, In-House Science, offers a master class in individual virtuosity in service to exquisitely fine-tuned interplay.

Recorded at the Villa Rothstein in Bad Ischl, Austria, during September 2016, the six-song set opens with the title track from Mira, the trio’s 2014 studio album. The piece showcases the band’s ability to play with texture and mood, and announces Smith as every bit his boss’s equal in stretching a song’s melody and chords in painterly ways.

With its eerie, looped soundscapes of bowed bass, “North Of The Northwind” is perhaps the set’s most striking moment. But it’s an extended reworking of “Science,” a song from Andersen’s ’80s fusion group Masqualero, that serves as the clearest marker of how far this group’s artistry has come. The core theme of the four-minute original here gets revisited over 11 riveting minutes from every possible angle, as all three players push and pull one another with vertiginous tempo shifts and bursts of fleet-fingered modal improvisation. Few trios, even after a decade together, can build musical landscapes this dramatic and richly detailed.