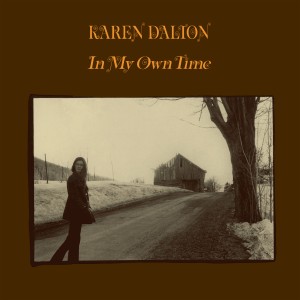 There are many artists throughout the back pages of folk and blues once relegated to the dustbins of history who are being resurrected by the kind of people diligent enough to dig through record crates and studio storage closets. Among them, Karen Dalton is certainly having a moment. A woman out of northeast rural Texas, via Oklahoma, don’t let her appearance or bio fool you. She draws comparisons to Bessie Smith, and musicians including Lucinda Williams, Joanna Newsom, Nick Cave, Angel Olsen, Devendra Banhart, Sharon Van Etten, Courtney Barnett and Adele cite her as an influence. Bob Dylan once said of her, “She had a voice like Billie Holiday and played the guitar like Jimmy Reed.”

Perhaps that’s why a documentary of her life is out now digitally and is coming to theaters in October. More importantly, Light In The Attic has a 50th anniversary edition of her sophomore album, 1971’s In My Own Time, considered her masterpiece, out last month. Meanwhile, Delmore Recording Society, via Third Man Records, has a 12-track live set, Shuckin’ Sugar, recorded from 1963 to 1964, featuring the earliest known duets of Dalton with then-husband, guitarist and songwriter Richard Tucker, out for Record Store Day April 23.

So, what does all this sound like? Armed with a long-necked banjo and a 12-string guitar, Dalton sings strongly in an authentic, earned Southern accent with accompaniment that sounds more like the tangled country of the Flying Burrito Brothers — especially on her outing of “When A Man Loves A Woman” — than anything out of Nashville.

Dalton’s certainly no songwriter; only one song on here gives her a credit, and it’s “Traditional; arranged by Karen Dalton,” on a tune called “Katie Cruel.” It doesn’t matter — it’s a staggeringly beautiful performance, just Dalton on banjo backed by a fiddle. She strikes some stomach-wrenching chord changes under her composed yet unassuming voice. She even whistles! And then complains guys never buy her drinks anymore. Ouch.

Elsewhere, Dalton lives in these songs so convincingly it makes it clear she, or someone around her, was archly talented at selecting her material. On “In My Own Dream,” over a medium-tempo romp drenched in barroom piano worthy of Dylan himself, Dalton sings, “I didn’t know I could be a fool. It took me a long time to find out. My mind turned upside-down.” Who would have thought such a relatable lyric could come from Paul Butterfield?

Shuckin’ Sugar, the live set, is, understandably, a rangier affair. Dalton — apparently suspicious of live performance — starts the entire proceedings by remarking to someone, “Shit, I came all this way for them to point at me?” She recovers from whatever was bothering her, and one imagines that by the time she was done using “a Biblical text” to inhabit the life of a snake on “If You’re A Viper” that the audience had stopped pointing. Her 12-string guitar is striking here; it shimmers on every song, particularly “Ribbon Bow.” Fairport Convention later took on the same song but needed seven instruments mic’ed up to match this. Best of all, Dalton and Tucker own “In The Pines” three decades before Kurt Cobain yelped his way through it as “Where Did You Sleep Last Night” on MTV Unplugged in New York in November 1993. Dalton herself had died of AIDS in New York eight months earlier.