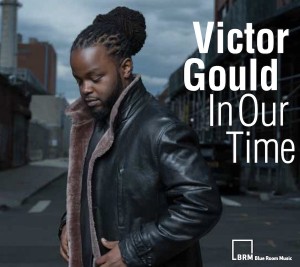 Victor Gould is a pianist, composer and arranger with tremendous facility on the keyboard, and a big heart to match. Born in Los Angeles, Gould excelled in music from a young age, establishing his reputation while still a student at Berklee College of Music and the Thelonious Monk Institute of Jazz, and earning accolades through the ASCAP Foundation Young Composer Award and the Monk International Piano Competition. His debut album, Clockwork, was voted top debut album in NPR Music’s 2016 Jazz Critics Poll. And since then, Gould has been developing from an emerging talent to into a full-blown, fantastic artist. This is especially true on his latest recording, In Our Time, on the Blue Room Music label. His music flows gracefully from thought to passage to statement with an elegant complexity that demonstrates his composer’s wit and charm. With his trio mates Tamir Shmerling on bass and Anwar Marshall on drums, Gould dances through a program of 11 tunes, including nine originals, with inner urge and sophistication. His intention is on display from the downbeat of “Blue Lotus,” the opening tune on this program. In just over five minutes, Gould delivers a virtual concerto of blissful sound — from the intricate melody to the interplay between Gould and Marshall’s drums to the legato of Shmerling’s bass, the tune takes unexpected twists that seem natural, logical and exhilarating in the hands of this group. It’s no wonder that the tune was inspired by a grant from Chamber Music America, but rest assured, this is jazz. Gould follows “Blue Lotus” up with two stunning tributes, first “Lord Wallace,” a tribute to the late trumpeter Wallace Roney. “I was a member of Wallace’s band for four years,” Gould said in press materials, “and we made the album Understanding. He had such a big impact on my life, hiring me right after I moved to New York.” In the second tribute, “Dear Ralph,” Gould pays homage to drummer Ralph Peterson Jr., who passed away in March, a former professor of Gould’s at Berklee who invited the young pianist to join his band when Gould was a freshman. Each beautifully captures the spirit of the honoree. “Lord Wallace” has the nuance and understated fire that Roney brought to the stage. “Dear Ralph” relays the take-no-prisoners approach of the bombastic drummer. As for covers, Gould chooses well on a few fronts. First, the songs, Gigi Gryce’s “Minority” and Wayne Shorter’s “Infant Eyes,” are incredible tunes by two of the greatest composers to ever write for jazz. Second, the guest artist on those tracks, tenor saxophonist Dayna Stephens, adds layers of lush to the proceedings with his velvety tone and fleet interpretations. In all, the entire recording delivers a thoughtful groove that’s thoroughly enjoyable from front to back. It’s a composer’s recording that lets the mind race and the toes tap. If you loved Clockwork, you’ll be knocked out by In Our Time. Gould takes a giant leap as a major voice in this music and beyond. Take the final cut, “In Memoriam,” as an example. Here Gould writes for the trio with a string quartet. It is beautiful. His ideas, and talent, cannot be tied down by genre. Victor Gould is an artist of big ambition, and even bigger heart.