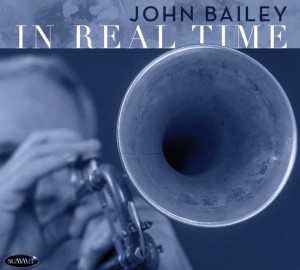 Bailey, here performing in a quintet, replete with guitar, marks his first album as a leader after decades as a sideman with bop’s buoyancy on quickstep compositions like “Triplicity,” “Blues For Ella” and “Stepping Up,” that last tune coming off as a work that would have been well-suited to a player like Clifford Brown. It also provides ample space for saxophonist Stacy Dillard to reel off a sizable solo, before guitarist John Hart gets in a few quick bars.

Just three tunes on In Real Time slow the tempo—two being that pair of aforementioned covers—giving Bailey time to emote in a less frenzied context. It’s the anomalous “Lovely Planet,” which opens with a hefty bass feature from Cameron Brown, that exemplifies the capaciousness of Bailey’s work. The five-minute tune, which doesn’t turn toward ensemble play until almost halfway through, seems to find the band mournfully considering what’s in store for Earth—or at least wondering what folks walking around every day might be thinking and feeling.

While each of Bailey’s compositions on In Real Time provide a setting for the bandleader’s performative agility, it’ll likely leave listeners desirous of a follow-up, where he might offer some additional stylistic diversity.