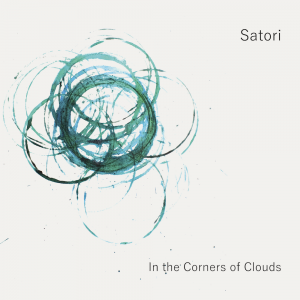 With an advanced degree in existential psychotherapy, UK-based saxophonist Josephine Davies pushes her Satori trio toward illumination through the exploration of small-group interplay.

In The Corners Of Clouds, a follow-up to 2017’s Satori (Whirlwind), finds the bandleader joined by bassist Dave Whitford and drummer James Maddren, who replaces Paul Clarvis from that earlier date. Here, Davies sketches eight open forms to benevolently move through as she whispers, pronounces and bleats during tracks like “Lazy” and the Coltrane-esque “Song Of The Dancing Saint.”

The title track opens quietly, as Davies enmeshes with Maddren. It doesn’t intimate an overwhelming display of technical prowess, but the track does show the bandleader in a seemingly reflective mode, Maddren poking around the kit tentatively, but in perfect unison with her mission. There’s such an easy-going intimacy on each of the nine tracks here, it’s tough to understand how Davies hasn’t made a bigger impact on this side of the Atlantic, with or without tour dates in the States.

The only real critique of In The Corners Of Clouds just might be that everything comes off at about the same tempo. But really, that could be attributed to Davies setting the tone and mood for her enlightened trio to explore a shared language.