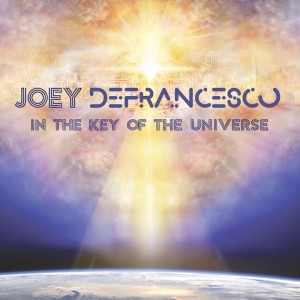 Pop-centric music sites make room for reviews of ancient Impulse! reissues, Kamasai Washington reignites the concept of soul-groove expressionism as both prayer book and political manifesto, and writers measure the breadth, value and impact of “cosmic” improv in pieces that dot the internet. The fire music that certain maestros conjured during the late ’60s is enjoying a heyday, and its trickle-down is having a bit more reach than even its most ardent supporters might have imagined.

A couple years ago, I wouldn’t have bet that a Pharoah Sanders and Joey DeFrancesco collab was in the cards, but In The Key Of The Universe finds the 47-year-old organ virtuoso and 78-year-old reed magician celebrating “The Creator Has A Master Plan,” the half-century-old song of praise that was the centerpiece of Sanders’ earthshaking album Karma.

Though there’s plenty of bounce and swing in play throughout the 10-track program, DeFrancesco’s self-professed embrace of spiritual jazz employs the kind of contemplative aura that gave so many of yesteryear’s exploratory efforts their personality. Functionally, it can come from the use of dreamy long tones and pensive phrasings. At several points here, a simmering heat, rather than a roiling squall, shapes the record’s temperament. A bit less predictable than previous groove-fueled DeFrancesco discs, In The Key Of The Universe is marked by a strain of passion that prioritizes grace. Even the emotions that Sanders reveals during “And So It Is” are refined, their gravitas bolstered by a fierce rendering of lines, not a tempest of multiphonics. With veteran drummer Billy Hart—who was part of the original “Creator” recording in 1969—contouring the action, there’s an exquisite flow to the entire program.

To some degree, this aesthetic shift could be spotted in the cool fervor of “Lift Every Voice And Sing” and “A Change Is Gonna Come” from DeFrancesco’s 2017 album, Project Freedom. That’s where the thoughtful impact of Troy Roberts came into play. The saxophonist has a key role here, as well, bringing eloquence to his nuanced solos on “Vibrations In Blue” and “A Path Through The Noise,” and tastefully echoing Trane when bolstering the music’s searching quality. There’s a sobriety to his work, identifiable even on the boppish ditty “It Swung Wide Open,” where DeFrancesco returns to the kind of barn-burning romp that earned him his rep.

When Sanders and Roberts’ horns blow side by side on the title track (which sounds like it could be pinched from McCoy Tyner’s songbook), the air gets thick. And the bookend solos of the elder’s pithy excursion, and the keyboardist’s curt stroll, are a sweet intergenerational trade reminding listeners that improv can be a place where various roads converge, and everyone benefits from the exchange.

In The Key Of The Universe: Inner Being; Vibrations In Blue; Awake And Blissed; It Swung Wide Open; In The Key Of The Universe; The Creator Has A Master Plan; And So It Is; Soul Perspective; A Path Through The Noise; Easier To Be. (58:30)
Personnel: Joey DeFrancesco, organ, keyboard, trumpet (7, 9, 10); Billy Hart, drums; Troy Roberts, saxophone, bass (6, 7); Pharoah Sanders, tenor saxophone (5, 6, 7); Sammy Figueroa, percussion.