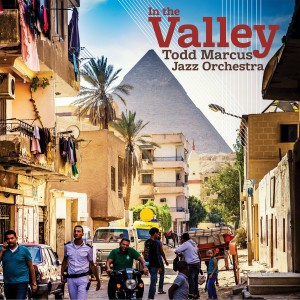 Bass clarinetist Todd Marcus explores his Egyptian heritage during most of the selections on In The Valley, recorded in June 2019. His late father was Egyptian and, as a child, Marcus visited Egypt several times. He returned in more recent times to visit family and in 2015 and 2018, when he performed some of his originals from his previous album, Blues For Tahrir, during tours.

On In The Valley, Marcus contributed all five compositions, four of which blend together Egyptian scales and melodies with Western harmonies and jazz improvising. He utilizes a six-horn nonet for this difficult but successful task.

Drum breaks, a brief tradeoff of the horns and the return of the speedy theme conclude the piece. “The Hive,” a tribute to modern-day Cairo, is most notable for trombonist Alan Ferber’s solo, which becomes increasingly more passionate the longer he plays.

The most colorful and accessible piece is “Cairo Street Ride,” which depicts the somewhat chaotic but ultimately logical traffic of Cairo. “Final Days,” which was written a few months after Marcus’ father’s death, is quietly emotional and somber.