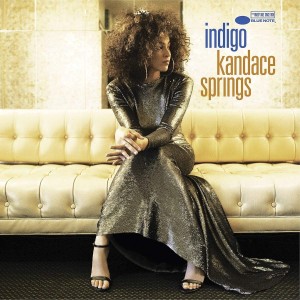 Singer-songwriter and keyboardist Kandace Springs’ new r&b album will appeal not only to fans of her excellent Blue Note debut, Soul Eyes (2016), but also to fans of releases such as José James’ 2017 disc Love In A Time Of Madness (Blue Note), where the vocals are spare, but soulful, and the production is savvy and high-tech. Springs recruited an outstanding crew for the recording sessions, including drummer/producer Karriem Riggins, bassist Burniss Travis II, flutist Elena Pinderhughes, drummer Chris Dave, bassist Robert Hurst and guitarist Anthony Wilson (the latter two are Riggins’ frequent bandmates in Diana Krall’s group). On the album’s most jazz-leaning track, the original tune “Unsophisticated,” guest Roy Hargrove provides some potent trumpet work.

Onstage and in the studio, Springs’ original compositions and taste in covers reflect a deep understanding of the history of r&b, rock and jazz. Her original tune “Fix Me” includes the line “When I miss you, doves cry,” a nod to her mentor Prince. Springs’ version of The Stylistics’ 1972 hit “People Make The World Go Round” features her fine piano work, as well as guest Nicholas Payton’s contributions via bass, Fender Rhodes and chord reharmonization. It takes guts to tackle Ewan MacColl’s “The First Time Ever I Saw Your Face,” not only because of the shadow cast by Roberta Flack’s classic 1972 version, but also because the song has been interpreted by such estimable singers as Lauryn Hill, Jennifer Hudson and Celine Dion. However, Springs’ interpretation—recorded with Hurst, Riggins and guitarist Jesse Harris—now enters the debate concerning the all-time-great versions.

The program also includes a rendition of Gabriel Garzón-Montano’s “6 8,” a tune that Drake samples on his track “Jungle.” Fans unfamiliar with Springs should check out the elegant video for her graceful, transcendent version.