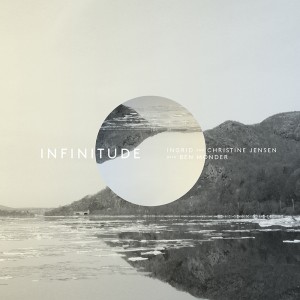 Ingrid and Christine Jensen explore calm, deep waters in pursuit of a collective feeling on their Whirlwind debut, Infinitude. Realizing a long-held ambition to write for and perform in the intimate setting of a quintet, these two West Canadian sisters—along with guitarist Ben Monder, bassist Fraser Hollins and drummer Jon Wikan (Ingrid’s husband)—immerse themselves in a seemingly boundless creative environment where patience and discovery rule the day. The conversational feel that pervades Infinitude (their first album as co-producers) is set on the very first track, “Blue Yonder,” where Ingrid’s dulcet trumpet tones meld with Christine’s legato alto saxophone in an initial unison passage before the instruments branch off to weave silky lines into multihued tapestries. Monder’s understated entrance into the fold has a profound effect: He plays with quiet fire throughout Infinitude, his heavily affected instrument conjuring a full orchestra’s worth of near-whispered textures and tonality. Encompassing everything from carefully composed, gentle melodic lines to utterly free, spontaneous passages, Infinitude presents a vast soundscape. The program offers hints of Christine’s well-documented expertise as a large-ensemble orchestrator and Ingrid’s proven strengths as a contemporary improviser, but revolves around a concept all its own—one that’s utterly organic. For further insight into the genesis of Infinitude, read DownBeat’s feature on Christine and Ingrid in the March 2017 issue. To get a preview of the music and hear the Jensens eloquently describe its creation, check out these three official trailers: Unleashing Freedom, Letting Go and Intimate Voices.