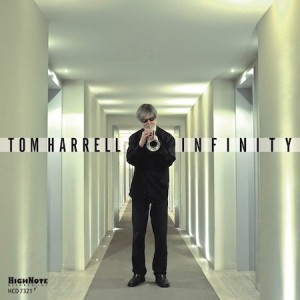 During the past decade, trumpeter and flugelhornist Tom Harrell has turned out about one HighNote album per year as a leader. A quintet of regular players usually serves as the core of these annual offerings, though not without deviations; sometimes he’ll double up his instruments, leave off a mainstay (like the piano) or add vocals or guitar.

Shifts in band configurations are endlessly intriguing, of course, but equally compelling is the sinew that binds a musician’s oeuvre. In Harrell’s case, two opposing forces—an orchestrator’s ear for form and a horn player’s flair for improvisation—characterize even the simplest of his compositions. Take “Duet” on Infinity, a release featuring the bandleader’s latest quintet, a guitar-based rhythm section with saxophone and trumpet. At just more than one-and-a-half minutes long, this biphonic musical sketch between Harrell and tenor saxophonist Mark Turner could just as easily be an outtake from a symphonic performance in a concert hall as from a bebop showdown on the bandstand.

With his more complex pieces, these forces play out just as potently. On “Dublin,” the horns sync in duet over a Celtic pedal in Charles Altura’s guitar, before breaking out into increasingly intense improvs; the pedal morphs into a lilting chromatic figure that overtakes the band and becomes the theme against which Harrell’s final solo—a galloping melodic riff—closes out the tune.

In the middle ground between “Duet” and “Dublin” lie Harrell’s more conventionally structured pieces: tunes with clearly articulated motivic ideas that bookend the solo sections (“The Fast,” “Coronation,” “Blue”). But if Harrell opts for a common strophic form, he’s going to shake it up somewhere else. For instance, the heads of these compositions—tuneful, rhythmically dynamic and a little bit tricky—set a high bar for soloists. How to maintain Harrell’s alacritous pace without betraying his melodic design?

Harrell works with players he knows well, even if he’s mixing and matching from earlier ensembles. Their playing flows holistically from his writing, with only the slightest of shifts between the composed and improvised sections. These natural transitions speak to a solid group rapport, where the soloists have a stake in the compositional act. In their solos, each chooses to play in Harrell’s musical language, rather than assert their virtuosic separateness—no small statement.

Harrell takes the title of the album from his meditative musings on the endless scope of the universe, a concept reflected on the album cover. At the center of the image’s repeating frames stands Harrell with his trumpet—a finite thing, but a conduit of his celestial tone, and a good place to begin such contemplations.