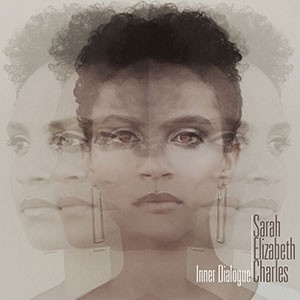 On her 2012 debut EP, Red, vocalist Sarah Elizabeth Charles delivered an impassioned blend of jazz, neo-soul, r&b and world music that revealed an emerging artist with a nuanced delivery and a poetic ear. On her sophomore effort, Inner Dialogue, she returns to that fertile ground with renewed ambition and a vivid imagination. The resulting album proves why she is one of today’s most dynamic young vocalists. Given her impressive career, this should hardly come as a surprise. A graduate of The New School, Charles has worked and studied with artists such as George Cables, Geri Allen, Nicholas Payton, Sheila Jordan, Jimmy Owens and Carmen Lundy. She is also an active educator, working as a teaching artist with Carnegie Hall’s Musical Connections program and giving private lessons in New York City and at Larchmont Music Academy. In addition to teaching, she is currently developing an early childhood music education program with Rise2Shine, a non-profit organization based in Haiti, a country that has long served as a source of inspiration for Charles, whose father is from Port-au-Prince. Her new album features two arrangements of Haitian folk melodies—“Yo-Yo” and “Choucoune”—and an original composition called “Haitian Sunrise.” On this track, Charles’ lyrics are quietly commanding. “Harmony has found me/Time moving slow,” she sings, and the music pauses as if holding its breath. Other tracks find her voice soaring. On “Breathe,” featuring guest trumpeter and co-producer Christian Scott, she holds long, powerful notes over a churning rock groove. On her artful arrangement of Miles Davis’ “Nardis,” she imbues the haunting melody with passion and poignancy. Accompanying musicians Jesse Elder (piano), Burniss Earl Travis II (bass) and John Davis (drums) are consummate collaborators, lifting Charles’ pure, unaffected vocals to transcendent heights.