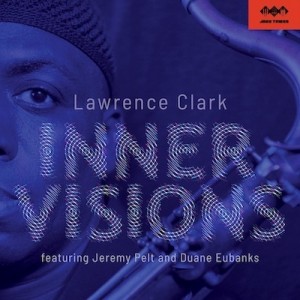 Tenor saxophonist Lawrence Clark begins Inner Visions with a tribute to Rashied Ali, one of John Coltrane’s last drummers. Clark played with Ali, who died in 2009, for more than a decade, and the first track, “Mr. Ali-1,” is an appropriate encapsulation of both elder musicians—it’s slow and meditative, in free time, and sounds as if it could have emerged from Coltrane’s late period. Clark’s tone is dry and grainy, and occasionally keening; he plays a lot of long tones. There’s a tense bowed bass from Joris Teepe, and floating cymbal and snare work from Darrell Green on the opener, the song feeling like an incantation (as does the final track, “Mr. Ali-2”).

The dedications stand out on an album that largely comes off as a straightahead hard-bop affair. The seven tracks between the Ali tributes are dark, swinging and mysterious, harkening back, say, to Coltrane in his earlier period—Blue Train, for instance—or Wayne Shorter in the mid-1960s. Or perhaps Art Blakey and his Jazz Messengers during the same time. Jeremy Pelt and Duane Eubanks, who split trumpet duties throughout, add to this impression. (There are few things that signify hard-bop more than a tenor/trumpet lineup.) Clark’s second album—his first, 2017’s independently released Forward Motion—for the most part, has a wide-open, modal, blues-inflected vibe, particularly “Blew,” “Judgement Day,” “Freedom” and the title track, a waltz. David Bryant’s piano, dark and vampy, plays a large part in helping to set the mood.

Though the record on the whole seems as if it’s reaching back to another period, it doesn’t sound dated or nostalgic. Clark’s a self-assured saxophonist with a vision that’s in touch with the tradition, but not mired in it.