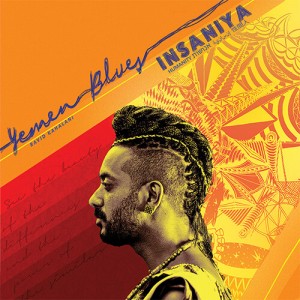 Yemen Blues is a band that must be on your radar, regardless of your preference for genre. The group consists of members from many different nationalities and incorporates multiple styles of music, perfectly blending folk and contemporary sounds from around the world with more well-known genres. On their sophomore album, Yemen Blues builds upon the raw energy and shared language of music from their first album, Yemen Blues (Globalev World of Music, 2011). The multilingual and eclectic INSANIYA also features the production talents of Bill Laswell, making for a contrasting yet polished and modern sound compared to their debut.

The production and general growth of the band have made for an even more beautifully blended album. Healthy doses of Yemen, Israeli and African music, as well as jazz, soul and funk are discernable, yet it’s impossible to categorize this music. Much of this diversity is due to the members’ shared view on the power of music—the main page of their website reads, “It doesn’t matter where you come from, your language is my language.” On INSANIYA, frontman and vocalist Ravid Kahalani probes this sentiment, singing in Arabic, Hebrew and French (and providing occasional English translations). The lyrics share thoughts on humanity (the English meaning of “insaniya”), love, peace and beauty—subjects Kahalani wants his listeners to understand and experience.

An intense and moving journey through tight horn lines, charismatic vocals and layers of instrumentation, INSANIYA is an album that will allow its listeners to jump into the many worlds of music present, or rather, the singular, unified world Kahalani shares.