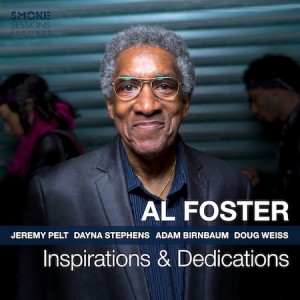 Grandiose programming gambits surely have a grip on jazz record-making at this late date. But there’s no lack of admirable new titles that “merely” rely on the thoughtful rendering of tunes—modest affairs that frame depth of interplay, melodic charisma and propulsive grace as key value points. Al Foster’s latest, one of a handful he’s made as a leader in a half-century-long career, is such a disc, a humble record of tasteful small moments.

The 76-year-old drummer is an esteemed master and a consummate sideman. From Sonny Rollins to Joe Henderson, Foster has rubbed shoulders with jazz royalty. While these new tunes have blossomed from experiences with family and friends, the music’s pleasures avail themselves regardless of whether listeners know the characters being referenced.

Equally skilled at bittersweet sambas and animated blues, the quintet is an agile bunch. Trumpeter Jeremy Pelt, saxophonist Dayna Stephens, pianist Adam Birnbaum and bassist Doug Weiss lean on each other, making the most of pithy solos, alert punctuation and focused arrangements that serve a variety of moods. The shift of temperaments between “Simone’s Dance,” “Our Son” and “Aloysius” illustrates the breadth of music Foster has absorbed in his life. Ditto for the album’s bookends, nuggets by his former bosses Herbie Hancock and Miles Davis. Both “Cantaloupe Island” and “Jean-Pierre” are fetching in their playful blend of acknowledgment and gratitude. Dispensing canny twists and turns, as well as creating a cozy vibe, they unite the entire package.