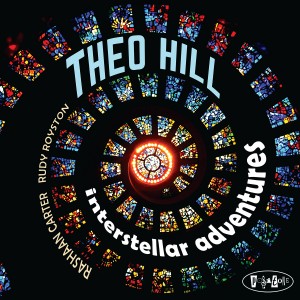 Several critics have cited pianist Theo Hill as a rising star, and in one way that’s apropos given Interstellar Adventures being the title of his latest release, his second on the Posi-Tone label. But “rising” needs to be updated nowadays, and even more so after this trio date with bassist Rashaan Carter and drummer Rudy Royston.

The songs on Interstellar Adventures, particularly “Cyclic Episode” (a Sam Rivers tune off the 1965 album Fuchsia Swing Song) and “Gyre,” fall comfortably between Hill’s impressionistic collages of sound, often delivered with a bell-like sonority, and the unrelenting furious passages that can leave a listener breathless. On “The Comet,” Hill’s trio reaches the launching pad and soars into space with Royston at the throttle.

The ensemble’s clearly in orbit on “Retrograde,” and Carter’s bass has a pulsing oscillation that surfaces again with good notice on “For Those Who Do.” On these occasions, Hill is content to let his cohort apply the groove, while he teases out scintillating fragments, before presenting longer, more invigorating portraits from one end of the keyboard to the other. There’s an inviting warmth to his ballads, although the arrival of a steadily propulsive left-hand is more than welcome. On “Revelations” and “Enchanted Forest,” the bandleader evokes a celeste tonality (or is that celestial), and it’s clear that the rising star has fully ascended.

There currently is much talk about Afrofuturism, mostly generated by the box office smash Black Panther, and Hill’s cosmic flights might be the film’s musical counterpart.