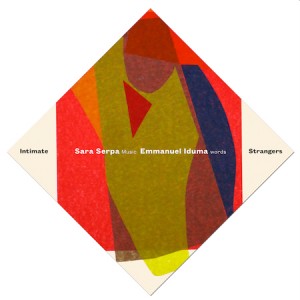 “Encounters with love and loss, grief and longing, displacement and war” — that’s how Sara Serpa and Emmanuel Iduma synopsized their 2018 presentation of Intimate Strangers at Brooklyn’s National Sawdust. The John Zorn-commissioned performance brought a poetic vibe to the emotional impact of forced migration in Africa and Europe as perceived by Nigerian writer Iduma in his book A Stranger’s Pose. New York-based, Portuguese vocalist Serpa, who earns more acclaim with each new project, designed a compelling small ensemble experience of piano, synth and multiple voices. Together, the words, music and images delivered powerful insights regarding the tolls taken when the comforts and stability of one’s home are ravaged.

This album version of the piece is just as effective. Through a 2000 duet with Ran Blake to 2020’s treatise on Portuguese colonialism in Angola, Serpa has developed a vocal approach that dodges the garishness of expressionism. A willful modesty marks her work, her rounded soprano often agile yet solemn. This reserve seems a particular victory when addressing the chronic friction between majority cultures and those under their thumb — venting could certainly be considered a proper reaction.

Instead, the group generates drama through a chamber music aura of mildly dissonant harmonies and spoken word. Iduma’s grounded voice mitigates some of the despair his narratives reveal. “[It’s not] a joyful performance,” Serpa has said. Drifting in a forlorn fog, “How Do You Know Where To Go” asks dire existential questions, and “Night” speaks of an “interminable horizon of lost love.” A worried atmosphere of those “tainted by wanderlust,” seeps through the program, but ultimately these cinematic tales use artful aplomb to trigger compassion. Thoughtfully unfolding, Serpa’s work reveals itself as a volley of resistance, clocking political inequities and their cultural fallout with heart on sleeve.