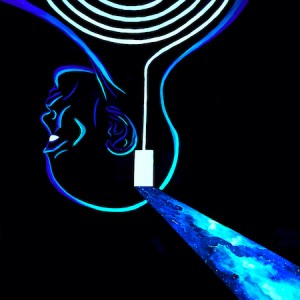 Theon Cross, perhaps best known for his role in buzzy British outfit Sons of Kemet, is bringing the tuba back into the jazz vanguard.

On Fyah, his previous album as a leader, Cross cooked with Nubya Garcia and Moses Boyd, mixing his love for early New Orleans bass lines with modern rhythms and synths. This go-round finds the gutsy tuba player in a duo formation with drummer/percussionist Emre Ramazanoglu and a wide-ranging slate of featured artists.

Intra-I is punching well above its weight in terms of the size of its sound, perhaps due to Ramazanoglu and Cross’ heavy use of effects that amplify and distort their respective instrumentss to nearly epic proportions. Cross’ tuba is rendered almost unrecognizable on certain cuts (such as “Play To Win” and “The Spiral”).

Intra-I plays well with scale, at times leaning towards cinematic. “Watching Over” is the perfect representation of a sound that towers like a plywood Jamaican sound system, while “Forward Progression II” is a monster dub cut that could pass for a lost recording from the soundtrack to the 1980 film Babylon. And yet “We Go Again” is as intimately scaled as a glass of wine shared between lovers.

This album is a proper mashup of a variety of sounds, from jazz to dubstep to afrobeats.

Plump with too many tropical flavors to accurately list here, it’s an enormously appealing sonic interpretation of the diversity found within the African diaspora of London.