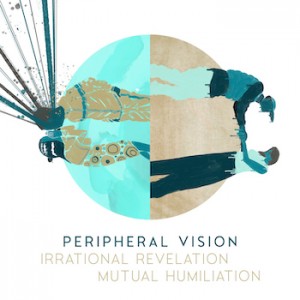 Peripheral Vision has always been a sort of two-sided affair. On one level, the Toronto-based quartet is about the writing relationship between electric guitarist Don Scott and double bassist Michael Herring. But there’s also a second aspect to the band’s music, which stems from the collaborative chemistry among Scott, Herring, tenor saxophonist Trevor Hogg and drummer Nick Fraser.

In that sense, it was probably inevitable that this double-edged quartet would end up making a double album. Irrational Revelation And Mutual Humiliation, its fifth release, plays up that duality by offering one disc that showcases the band’s compositional chops, and a second that emphasizes its instrumental agility. Moreover, it does so while broadening the band’s sonic palette, bringing in extra players on some tracks and making more extensive use of overdubs and multitracking.

What’s most striking, though, is Peripheral Vision’s stylistic range. Take, for example, Herring’s three-part Reconciliation Suite, from the first disc. Written in the hope of addressing, as a nonaboriginal person, the injustice and inequality revealed through the work of Reconciliation Canada, the music is alternately questioning and prayerful, hushed and raucous. As it moves from the opening “Prayer For Reconciliation” to the final “Kaddish For Missing And Murdered Indigenous Women And Girls,” it incorporates the full range of Peripheral Vision’s sound, from the classical sweetness of Herring’s arco work to the distorted roar of Scott’s overdriven guitar. It’s an astonishing piece of work, and amazingly is followed by “For Kent Monkman,” a boppish contrafact on “Cherokee,” that shows the band can play post-bop just as convincingly as they can invoke chamber music or art-rock.

According to the liner notes, the second disc’s title—Mutual Humiliation—stems from practice sessions in which Herring and Fraser build cohesion by “working on something hard (even humiliating) together.” “Title Crisis” has precisely that sort of feel, an ever-changing groove that stays in the pocket while remaining rhythmically off-balance. But that’s just one of the ways Peripheral Vision shows off its time-keeping acuity: There’s everything from the slow, spacious reverie of “Neo-Expressionism For Pacifists” to the gracefully dancing “Schleudern,” where Hogg and Fraser almost completely blur the line between melody and rhythm.