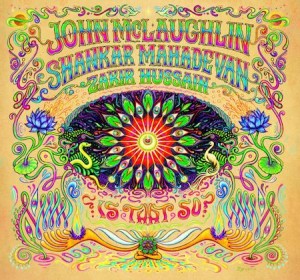 After continuing along the fusion trail for 2018’s Live In San Francisco, guitarist John McLaughlin returns with something far more mellow and sublime than the blistering fusillades he offered on that earlier outing. Harkening back to Shakti, the bandleader’s 1970s ensemble, Is That So? finds the guitarist blending beautifully with tabla master Zakir Hussain, and renowned Indian vocalist and Bollywood film composer Shankar Mahadevan on tunes that bring Western harmony to classical Indian ragas. The results are divine.

Six years in the making, Is That So? showcases the majestic voice of Mahadevan, who began collaborating with McLaughlin on the 2000 live album Saturday Night In Bombay. With his commanding pipes, Mahadevan soars over the percolating undercurrent of Hussain’s tablas and McLaughlin’s orchestral textures that he meticulously created with multiple layers of synthesizers, as on “Kabir,” “The Guru” and “Tara.” In fact, there’s only one track where McLaughlin plays conventional guitar, providing simple, clean-toned arpeggios as a kind of drone beneath the proceedings for the peaceful “Sakhi.” McLaughlin’s fabled chops come to the fore in his burning exchanges with Hussain on “The Search” and “The Beloved,” though his warm, flute-like timbres on those tunes create a more enchanting effect than his past aggressive, fleet-fingered fretboard excursions. But the real star here is Mahadevan, whose emotive, keening vocals—from a tender whisper to powerhouse crescendo—are breathtaking.