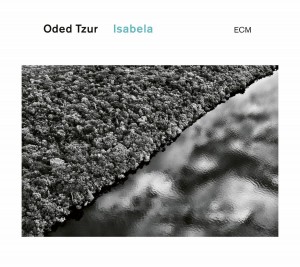 The Indian classical raga form is one with blurred edges; its soft melodies fade in and out of focus, ultimately cohering to weave a tapestry of enveloping sound that can feel like it will never end, like light breaking at dawn.

Saxophonist Oded Tzur has become an expert in blending the improvisatory jazz tradition with the raga and its ever-expanding presence. Training with Bansuri master Hariprasad Chaurasia, Israeli-American Tzur has developed a unique style on his tenor, a softly undulating tone that mirrors the piping of Indian flutes, while containing an earthy, reed-driven power ready to be unleashed at key moments.

Tzur’s second release on ECM, Isabela, is the most fully realized iteration of his North Indian-inspired jazz compositions. A suite of five tracks, the album opens with an ambient, unmetered “Invocation,” in the tradition of the raga alap, before undertaking its own dynamic arc — from the pensive, gossamer melodies of “Noam” through to the rhythmic piano of “The Lion Turtle” and ending on the percussive explosion of “Love Song For The Rainy Season.”

In gradually building the range of his intensity, Tzur and his band take the listener on an emotive journey. There is the romantic longing of the title track, featuring a deft interplay between Tzur and pianist Nitai Hershkovits’s voicings, the forlorn longing of “Noam,” given grounding by bassist Petros Klampanis, and finally the full band bombast of the closing track. Here, drummer Johnathan Blake expertly pushes his rhythms until the entire quartet is cooking, while Tzur blows forcefully to contain us within his intensity. In that sound, dawn moves into day and bright, blinding sunlight.