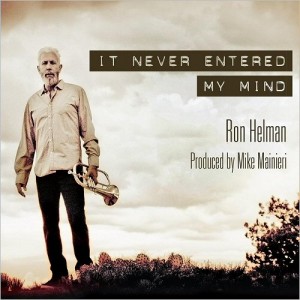 While listening to flugelhornist Ron Helman’s new album, you might detect a strong insinuation of line and form, of motion, elegance and grace—and for good reason. Before becoming a jazz musician at the ripe age of 44, the New Jersey–born, New Mexico–based Helman spent years as a dancer and gymnast. In his former life, he served as a dance coach with the Juilliard School Drama Department and even provided chorographical expertise to the likes of Sting, Al Pacino and Julianne Moore. A certified life coach and business coach, Helman also trained as a classical trumpeter and performed in off–Broadway productions. He calls It Never Entered My Mind an autobiographical album, and for the most part, the music on this disc is as compelling and diverse as Helman’s life story. Produced by Mike Mainieri, the program of 11 jazz standards unfolds with a sense of thematic balance, alternating between hard, biting swing and misty balladry. Helman’s solo on a gutsy “Just Friends” provides flash and pop, and later, a guest turn by vocalist Ann Hampton Calloway on “Born To Be Blue” luxuriates in slow, deliberate gestures. Helman’s tone is of the airy, wind–blown sort, and positions him squarely on the Miles Davis/Chet Baker end of the timbre spectrum. But it’s a tone he adapts to varied contexts. On “All Or Nothing At All,” he engages in flinty dialogue with saxophonist Steve Wilson, generating sparks in the heated exchange, while on the album–closing title track, he converses with pianist Rachel Z Hakim and guitarist David Spinozza in whispers. Bassist James Genus and drummer Joel Rosenblatt add crisp accompaniment no matter the setting or style, and Mainieri’s clean, attentive production ensures a crystalline glow.