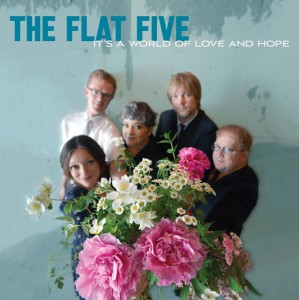 The Flat Five album has finally arrived. For 10 years, Chicagoans have swooned at the shows by this indie supergroup consisting of vocalist Kelly Hogan, vocalist/guitarist Nora O’Connor, multi-instrumentalist/vocalist Scott Ligon, bassist/vocalist Casey McDonough and drummer/vocalist/recording engineer Alex Hall. But only recently has the band released its debut, a project that started in September 2014. The set list for a Flat Five concert is often a hodgepodge containing songs written or popularized by Hoagy Carmichael, Bob Dorough, The Free Design and The Monkees, as well as a killer version of “Sermonette” based on the arrangement used by Lambert, Hendricks & Ross. But for this album, the quintet focuses on the work of one songwriter: Chris Ligon (Scott’s older brother). Humor is an important component of the elder Ligon’s oeuvre, and The Flat Five doesn’t shy away from it, as evidenced by the hilarious, Mills Brothers-style arrangement of “Buglight” or the goofy poetry of “Florida,” which extols the benefits of moving to the Sunshine State: “We’ll get a van, a window fan/ We’ll lay in the sand and get a tan in Florida/ We’ll give up meat, we’ll live on sweets/ We’ll trick-or-treat in the blazing heat in Florida.” But all is not fun and games here. Although there are some wry turns of phrase in the lyrics of “Birmingham,” O’Connor’s singing is simply heartbreaking. Elsewhere, a misty melancholy seeps through “Bluebirds In Michigan,” thanks to Hogan’s nuanced vocals and the work of guest cellist Austin Hoke. Due to its individual members’ busy schedules—McDonough and Scott Ligon are both in NRBQ—The Flat Five doesn’t tour much, but this album will allow listeners all over the world to check out a band that Chicagoans have treasured for a long time.