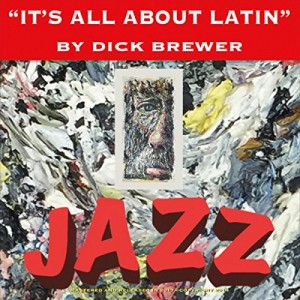 The making of a great jazz album is an exercise in balance, akin to cooking a gourmet dish. Too many ingredients and the food becomes unpalatable; too few, and the dish becomes bland. Pianist Dick Brewer’s latest album draws upon diverse flavorings—from fusion to prog, modern jazz to bossa, even rock—yet still manages to achieve a balanced profile from track to track. Variegated as the songs are, there is one unifying element, and the title provides the clue: It’s all about Latin.

This is an album of calm, breezy grooves and son-soaked melodies, with songs that unfold at a leisurely pace rather than rushing toward a conclusion. “LO Beaux,” with its slow-strolling bossa groove, is one such example, as is the follow-up “Jelly Beans,” which quickens the pulse but maintains the same self-assured tranquility. That’s not to say, however, that the album is marked by any sort of lethargy. “She’s Dancing,” the opening track, is brusque and bracing, with a distorted guitar solo that pushes the sound toward prog. “Buena Fiesta” is another song based on a heart-quickening tempo, and features some sterling keyboard work from Brewer. Tart horn-section jabs and undulating woodwind flurries add vitality and depth to songs like “Chic” and “It’s Only You,” while album closer “Something New” relies on a jagged groove and dynamic guitar-vibraphone dialog to sustain its unflagging optimism.

As a whole, the album tends toward the smoother side, with rhythms that sometimes seem more rote than reactive. But it’s an easy blemish to overlook. When it’s all about the Latin, groove and melody are key. This album packs plenty of both. DB