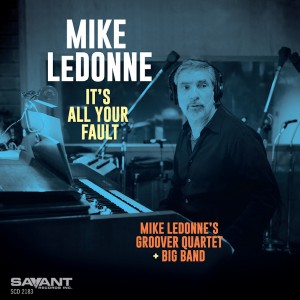 Organist Mike LeDonne refreshes familiar grooves on a too-brief album so relaxed and authoritative, you could swear you’re in a favorite club. With five tunes by LeDonne’s big band, three by the Groover Quartet, this vivid album, produced at the Van Gelder Recording Studios, rings with presence and authority.

It’s All Your Fault blasts off with the title track, an homage to veteran organist Dr. Lonnie Smith, one of three LeDonne originals bedding his soul into Dennis Mackrel’s driving big-band arrangements. It ends with LeDonne’s “Blues For Jed,” a traditional blues in quartet featuring one of the leader’s meatier solos.

Not only is LeDonne a versatile composer, he’s an astute curator. The big band take on “Rock With You,” a Michael Jackson hit, burbles and swings; Lionel Richie’s “Still” percolates in the smaller format; and Grant Green’s “Matador” punches hard, thanks to Eric Alexander’s aggressive tenor, Peter Bernstein’s spare guitar and Joseph Farnsworth’s bustling drums. “Matador,” thrilling for its complex horn voicings, solos that could well have gone on and a fiery LeDonne, is a highlight. Farnsworth even makes accuracy exciting.

Another delight: the quartet’s visit to “Biggest Part Of Me,” a hit for Ambrosia in 1980. LeDonne and Alexander soup it up, toughening the alluring soft soul of the original by bringing out its jazz bones and turning it into something more ominous and satisfying in an unexpected way.