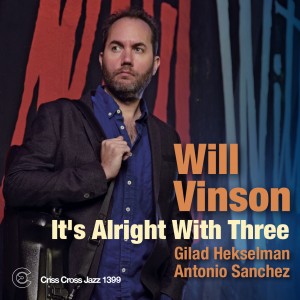 Listeners might find themselves reminded of flugelhornist John Raymond’s trio Real Feels when listening to saxophonist Will Vinson’s It’s Alright With Three. Guitarist Gilad Hekselman is a member of both bands, and like Real Feels, Vinson’s trio gets by without a bassist. But more importantly, the two ensembles seem to share a philosophy of accessibility.

Drummer Antonio Sanchez’s kick drum has a pleasing whump and his cymbals wash by like cars passing at midnight. Hekselman’s guitar rings softly on ballads like “Where Are You?” But on high-energy originals like “Samurai Hee Haw” and “Resting Jazz Face,” it swells and develops a sharp bite, and his solos head in the direction of rifftastic shredding. Vinson, meanwhile, switches back and forth between alto and soprano saxophone. On the fuller horn, he’s got a thick, gravy-slathered tone that recalls the alto’s most muscular practitioners, like Arthur Blythe and Cannonball Adderley. On the soprano, he avoids sounding like a kazoo, which is the least you can ask of the guy.

The album includes four originals with witty titles—the two previously mentioned, “The Pines” and “Down Homeless”—and versions of several standards, including “My Shining Hour,” the title track and“Nobody Else But Me,” that never get bogged down by reverence. The latter piece is particularly impressive, transforming into an atmospherically swinging nine-minute album closer full of murmuring alto, shimmering guitar and booming drums.

All these disparate takes fit together, as this unique group puts its personal stamp on every note.

It’s Alright With Three: My Shining Hour; The Pines; It’s Alright With Me; Samurai Hee Haw; Where Are You?; Resting Jazz Face; Down Homeless; Nobody Else But Me. (56:06)
Personnel: Will Vinson, alto, soprano saxophone; Gilad Hekselman, guitar; Antonio Sanchez, drums, percussion.