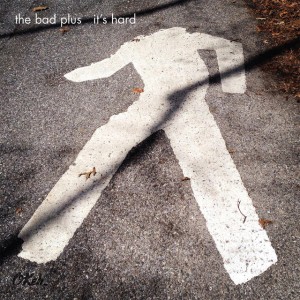 Johnny Cash. Prince. Cyndi Lauper. Kraftwerk. Barry Manilow. Ornette Coleman. What do they have in common? Those artists wrote and/or popularized tunes that are included on It’s Hard, the 11th studio album by The Bad Plus. This all-acoustic, all-covers program finds the trio (pianist Ethan Iverson, bassist Reid Anderson and drummer Dave King) playing to its strengths as perpetually intellectual yet mischievous musicians. A covers album presents a conundrum. If an artist does too little with a song, then fans ask, “What’s the point?” Yet, if an artist strays too far from the original (or best-known) version, then fans ask that same question. No one on this planet was clamoring for a new version of “Mandy” (the cheesy weeper popularized by Manilow), yet The Bad Plus turns it into a fascinating gem, thanks to an arrangement that includes a segment in which King bashes up a thunderstorm. Peter Gabriel’s indelible hook on “Games Without Frontiers” is rendered in recognizable form, yet placed in a more exploratory setting. The Bad Plus formed in Minneapolis, so it’s not surprising that the band would interpret a Prince tune like “The Beautiful Ones,” but an ironic twist here is that the band recorded the track before the rock icon’s death on April 21. The band’s version of ”Don’t Dream It‘s Over” (a pop masterpiece crafted by Neil Finn of Crowded House) is reminiscent of some of the work Cassandra Wilson has done with pop tunes—digging into the emotional core, nodding to a melody embedded in the listener’s memory, and extending the piece with new segments that feel logical. The Bad Plus’ creative renditions of Kraftwerk’s “The Robots” (with a seductive bass line) and Cash’s signature tune, ”I Walk The Line“ (featuring King’s clever, catchy brushwork), succeed as pieces of art that stand on their own merits, while simultaneously giving fans a new appreciation of the original versions.