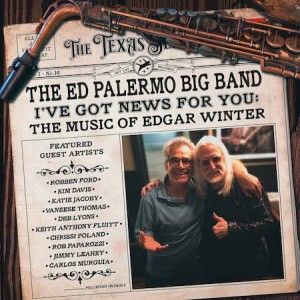 Tributes are the lifeblood of Ed Palermo’s big band. Beginning in 1997 with an album celebrating Frank Zappa, Palermo’s 16-piece group has gone on to release several more volumes of Zappa’s music, as well as records on The Beatles and Todd Rundgren. Palermo’s tributes highlight the lasting power of the original material, as well as subtly altering it into a new format.

The band works best on numbers with a built-in swing, such as on the Ray Charles-inspired title track and the maximalist Quincy Jones references of “All Out.” Guest vocalists also soar atop the vamping horns, especially Vaneese Thomas on the gospel-laced “You Are My Sunshine.”

It is only on the guitar-led “Tobacco Road” and the esoteric songwriting sections of the “Winter’s Dream” suite (“Where Have You Gone,” “Rise To Fall”) that the big band arrangements can make the sparkling melodies feel laden. Here, Palermo encounters the overbearing potential of the tribute.

Yet, I’ve Got News is still a largely satisfying showcase of big band versatility — an instrumental behemoth that can take almost any genre in its stride.