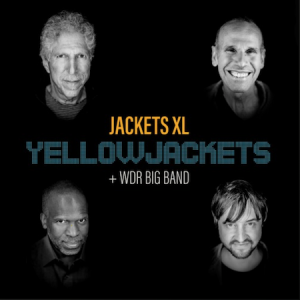 On Jackets XL, Yellowjackets partner with WDR Big Band, one of Germany’s most illustrious jazz organizations. It seems inevitable that these two ensembles would meet up: Longtime Yellowjackets saxophonist/EWI player Bob Mintzer has been conductor of the large ensemble for the past four years. Still, adapting the dexterous fusion quartet’s repertoire from the past 40 years to the tightly scripted big band took some doing.

Mintzer rearranged several mainstays here, among them the ebullient “Mile High”—a stately, horn-led anthem in this incarnation. And the gospel blowout “Revelation” is filled with buoyant brass instead of layered vocals. Keyboardist Russell Ferrante, the only original member still with the group, borrowed inspiration from composer Maria Schneider’s large jazz ensemble to revamp his beautifully jumbled “Coherence.” Now orchestrated, it retains the same excitement as before, this time saturated in the bright chromaticism of the winds. He also contributed two new pieces to Jackets XL: “One Day,” a crisp medium-tempo tune, and “Tokyo Tale,” a well-lit showcase for Mintzer’s arpeggiated soloing.