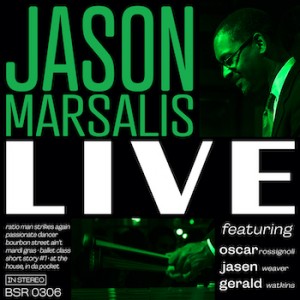 By their very choice of instrument, vibraphonists are adventurers, going where few musicians go. Even by that standard, Jason Marsalis has developed into an irrepressible force since taking up vibes, shifting his focus from drums about 20 years ago. Jason Marsalis Live might include previously recorded songs, all of them originals, but the album bristles with clever surprises, riding the rim of our expectations. From the Monkish jabs on “Ratio Man” to the strutting, high-stepping Crescent City classicism of “At The House, In Da Pocket,” Live—recorded at New Orleans’ storied Little Gems Saloon as part of celebration of Basin Street Records’ 20th anniversary in 2017—never lets up. Virtuosic pianist Oscar Rossignoli runs cascading figures with his right hand while providing lagging counterpoint with his left on “Bourbon Street Ain’t Mardi Gras.” Alternating between ringing and muted tones, Marsalis creates joyous 3D effects with his four-mallet mastery. Perhaps inspired by Lionel Hampton, he’s after a bigger and harder-edged, but still fluid, sound. While the bandleader’s playing and composing reflects a deep knowledge of jazz history, they hop and skip past familiar solutions. There’s something genuinely new going on here.