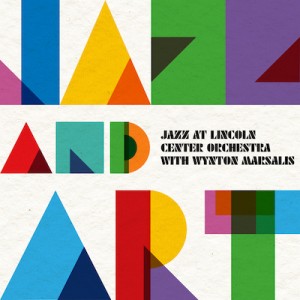 However much Jazz And Art might look like a concept album, it originally was a concept concert. In 2010, The Jazz At Lincoln Center Orchestra presented a set of newly commissioned work inspired by great art. Considering that several of the painters were influenced by jazz—Stuart Davis, Romare Bearden—it made for a nice bit of cultural cross-pollination. The album doesn’t come with projections of the paintings that accompanied the show, but there are 10 pieces of music, instead of the concert’s seven.

Some of the writing here is interpretive, as with Vincent Gardner’s coloristic “Blue Twirl,” which tries to translate the energy of Sam Gilliam’s abstractions into sound. Others are representational, with Chris Crenshaw drawing on big-band tropes to evoke the swinging Harlem depicted in Bearden’s “The Block.” Mostly, though, what we get is pastiche. Papo Vasquez’s tribute to Wifredo Lam—“Air, Earth, Fire, Water (Orisha Medley)”—acknowledges the painter’s embrace of Santeria, but does so through soundtracky flourishes, redeemed only by righteous batá drumming and a growling Wynton Marsalis solo. Reassuringly, Sherman Irby’s Norman Lewis tribute, “Twilight Sounds,” closes the album on the sort of New Orleans-style groove fans have come to expect from JLCO, ensuring that even if Jazz And Art doesn’t live up to its premise, it doesn’t entirely disappoint either.